Just look at a 2016 election map by counties, and you’ll see the urban-rural divide is real — blue dots concentrate in urban centers and red dots cover the rural. 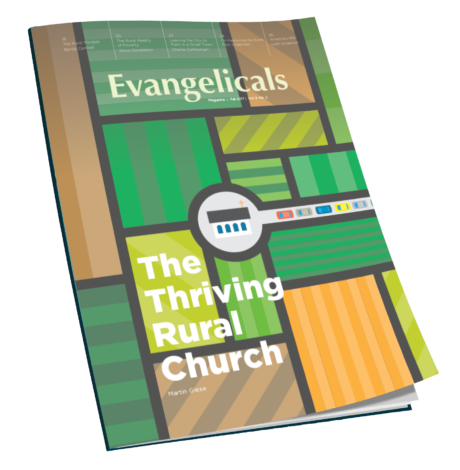 Just look at a 2016 election map by counties, and you’ll see the urban-rural divide is real — blue dots concentrate in urban centers and red dots cover the rural. The election of President Trump caught many by surprise, with news reporters and political pundits scratching their heads about rural America.

For us, it’s not about politics, it’s about people. And American rural counties include 46.2 million people, or 15 percent of the U.S. population. But, maybe it’s also time for evangelicals to pause and consider: What do we know about rural America? How are our fellow pastors and churches doing in these areas? Have we overlooked rural areas as we’ve focused on urban church planting? In wanting to see ministry programs flourish in the suburbs, have we ignored those farther out? With our desire for big, have we forgotten the small?

As Martin Giese points out in this issue’s cover article (p. 14), there are ample strategic reasons for evangelicals to put leadership, resources and vision into rural church ministry. He even makes the claim that if we want to reach the world for Christ, we need to invest in rural communities.

Rural America has its own culture. Those in rural America may have more in common with others in rural communities across the country (or world!) than they do with those who live in cities in their same state. Church planting in rural America isn’t the same as it is in urban areas. Pastoring in small towns presents unique challenges that suburban pastors don’t often face.

Leaving the City to Plant in a Small Town

On Pastoring the Rural