Are Multi-ethnic Churches the Only Way?

Evangelicals of different races and ethnicities share so much common ground. Why have we been so divided through so many generations? 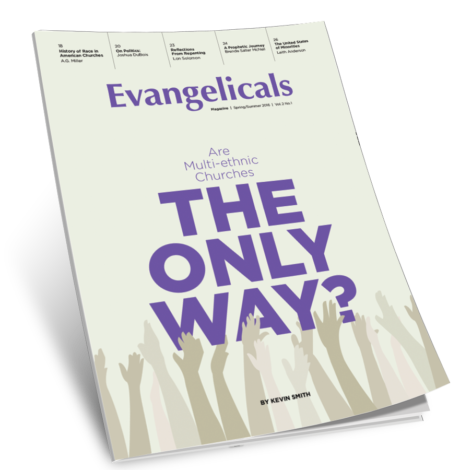 If words came in colors, what color would “evangelical” be? If the only source of color choice came from the palette of election year reporting, the color would probably be white. The mistaken political impression is that most — if not all — American evangelicals are Caucasians with European ancestry. Far from it!

When comparing white evangelicals with black Protestants in The Atlantic (December 22, 2014), Robert P. Jones wrote that “these two groups … share a belief in a personal God, an emphasis on individual salvation, and religious architecture that emphasizes the centrality of the pulpit over the altar.” According to a 2015 LifeWay Research study, 44 percent of black Americans are evangelical.

And, 30 percent of Hispanic Americans are evangelical. The cover article for TIME magazine on April 15, 2013, was “The Latino Reformation” describing the explosive growth of evangélicos among American Hispanics.

Forty percent of Korean Americans are evangelicals, according to USA Today (July 19, 2012). “Three out of four Asian-American evangelical Protestants (76%) say they attend church weekly, compared with 64% of U.S. white evangelicals. They are also distinctly more likely to say their religion is the ‘one true faith’ (72% vs. 49%).”

While there are significant cultural, political and socioeconomic differences among evangelicals classified by race or ethnicity, there are also wide-ranging areas of spiritual and theological agreement. The reality is that most evangelical growth in America is among non-white minorities.

If we have such important points of agreement and share so much common ground, why have we been so divided through so many generations? Why haven’t white evangelicals done more and done better at showing respect, joining causes and sharing faith? Wouldn’t we have done much better and much more for the cause of Jesus Christ if we were united? Or, have ethnic, racial and language distinctives preserved and advanced the uniqueness, identity and faith of minorities?

These are some of the questions evangelicals must answer and are trying to address. Some are topics for this issue as we continue the highly important conversation of race among American evangelicals.

Engaging the Elections at Church

Are Multi-ethnic Churches the Only Way?

The United States of Minorities