The data suggests that leadership transitions in our churches and ministries will continue to be a significant part of our experience for the next decade, and we should be ready. 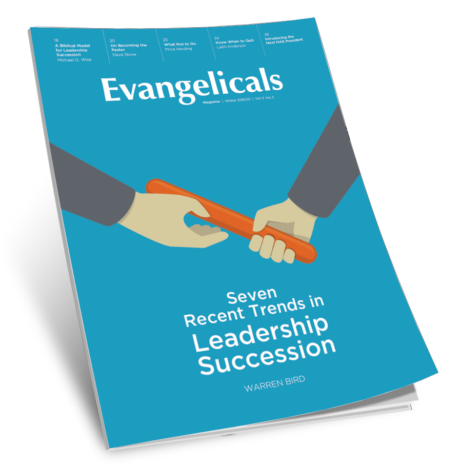 Some estimates suggest that from now until 2030, 10,000 Baby Boomers (the generation born between 1946 and 1964) will hit retirement age each day. The contributions of the largest generation in the workforce have been unmatched. The same can be said for churches and ministries.

Largely under the leadership of Baby Boomers, small church plants all across America grew to churches of tens of thousands in attendance, churches and nonprofits harnessed technology to go multi-site, create apps and reach people on the other side of the world, a plethora of new ministries were born and sustained, and on and on. And now Boomers are leaving the ministries they have been leading for decades — and in many cases the ministries they founded. Almost every day we hear of a well-known pastor retiring or of a newly appointed CEO for a significant Christian nonprofit.

At the National Association of Evangelicals, we have our own story. After twice serving as interim president and having served as NAE president since 2007, Leith Anderson announced he would retire at the end of 2019. This set in motion a detailed leadership succession plan, leading to the election of Walter Kim as the next NAE president.

Information about these leaders and our transition is included throughout the pages of this magazine; however, the main impetus for this magazine edition is to learn about leadership succession together. The data suggests that leadership transitions in our churches and ministries will continue to be a significant part of our experience for the next decade, and we should be ready.

We are grateful for those who have provided guidance to leadership succession — people like Warren Bird, who penned our cover article and offers seven positive trends in leadership succession (Page 14), and Price Harding, who finds CEOs for the largest faith-based nonprofits and shares what not to do in his article on Page 23.

And, we are especially grateful for the many faithful leaders, like our own Leith Anderson, who have led with wisdom, courage and care so that all markers point to a bright tomorrow.