Polarization is like powerful magnets placed throughout our ideological spectrum. They pull us apart and clump us into tribes. 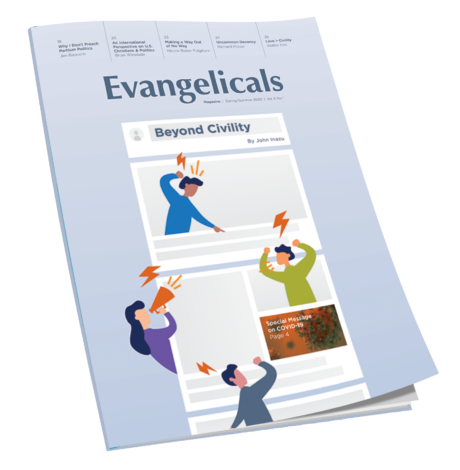 We originally intended this issue to focus on the matter of civility in our public and personal lives. That focus remains, but the context has changed. The following articles were written before the coronavirus descended upon our nation. Since COVID-19 has become a standard part of our vocabulary and a global reality, our shared public life has a new urgency not only for civility but for something far more substantial.

As I write this, the global death toll is 129,000. By the time you read it, the death toll will be much higher. Our nation has joined the world in confronting a crisis.

A crisis is a moment of revelation. This virus has revealed our fragility and our common humanity. As the Preacher of Ecclesiastes soberly and even somberly observes: “I have seen something else under the sun: The race is not to the swift or the battle to the strong, nor does food come to the wise or wealth to the brilliant or favor to the learned; but time and chance happen to them all” (Ecclesiastes 9:11). Time and chance have today taken the form of a virus. A thing so small that it is questionably considered a life form, but so significant that it has unquestionably affected life. The coronavirus has devastated nations wealthy and weak alike.

We currently have no cure and no vaccine. Our best defense is God’s grace and the communal will to respond. God’s common grace has placed humans in society for our mutual good. While Christians share in this common grace, we also have the special grace given through Christ who promised to us that “my grace is sufficient for you, for my power is made perfect in weakness” (2 Corinthians 12:9). His grace is a unique provision for the Church’s unity and mission.

However, our collective will to respond depends upon a fundamental belief in community. As G.K. Chesterton put it, “We men and women are all in the same boat, upon a stormy sea. We owe to each other a terrible and tragic loyalty.”

In this moment, we owe each other a terrible loyalty.

Here is the great paradox: In order to enact physical distancing, we need spiritual solidarity. A single virus requires a multitude of coordinated responses. We need to trust each other. We need to work together and lay aside our personal convenience for corporate good. The call for civility in this situation takes on life and death ramifications.

This is because the reality of our common humanity does not automatically lead to unity. Polarization is like powerful magnets placed throughout our ideological spectrum. They pull us apart and clump us into tribes. We have a hard time breaking away from the magnetic security of being with like-minded people, who reinforce our like-mindedness. Efforts to move toward others must labor against that pull. Such labor is exhausting.

The Pew Research Center has a staggering interactive chart on political polarization, illustrating the shift in political values over the past two decades. It shows that Americans have become more ideologically consistent in their political values, and those values have become more strongly associated with partisanship. Where there was once greater overlap, there is now is a wide gap. Jim Baucom, who wrote the article “Why I Don’t Preach Partisan Politics” for this magazine, told us that when he shared this data during a Sunday service, his church literally gasped.

The divisions between Republicans and Democrats on fundamental political values — on government, race, immigration, national security, environmental protection and other areas — reached record levels during Barack Obama’s presidency. In Donald Trump’s presidency, these gaps have grown even larger, Pew Research Center reported in 2017.

In more recent studies, the Pew Research Center has shown how Republicans and Democrats place their trust in two nearly inverse news media environments. We’re not consuming the same content, nor are we interpreting it in the same way. Unfortunately, we have seen that our differences have often led to distrust, and distrust has sometimes soured into disdain. This has played out on a national and global scale but also on the personal level, with division in our families and in our churches.

The coronavirus crisis has highlighted many fault lines in our democracy, but it has also revealed a tremendous capacity to work for the common good. Our prayer is for God to do an extraordinary work to produce unity. We have been and will continue calling our congregations to remember that we are in the world but not of it. Just as Jesus responded to Pilate, “my kingdom is not of this world,” and Paul declared to the Philippians, “our citizenship is in heaven,” we belong to a different kingdom, and we belong to each other. Our higher allegiance ought to be our greatest strength and defining characteristic. We may be Democrats or Republicans for a season of life, perhaps 70 years, but we will be part of God’s kingdom that lasts forever.

The coronavirus has strained the economy, mental health, education, at-risk populations, community life, and more. Our efforts must be broad and also prolonged. Such is the case with civility, but even more the case for the deeper Christian virtues of faith, hope and love. A pandemic requires believers to model how to transcend differences that seem insurmountable for the unity that reveals itself as crucial.

This magazine issue is designed to help us make sense of this cultural moment, to encourage perseverance in a frustrating time, and to give us biblical tools to engage in a manner that demonstrates our primary allegiance to King Jesus Christ.