How One Church Cultivates Stewardship in Their Community 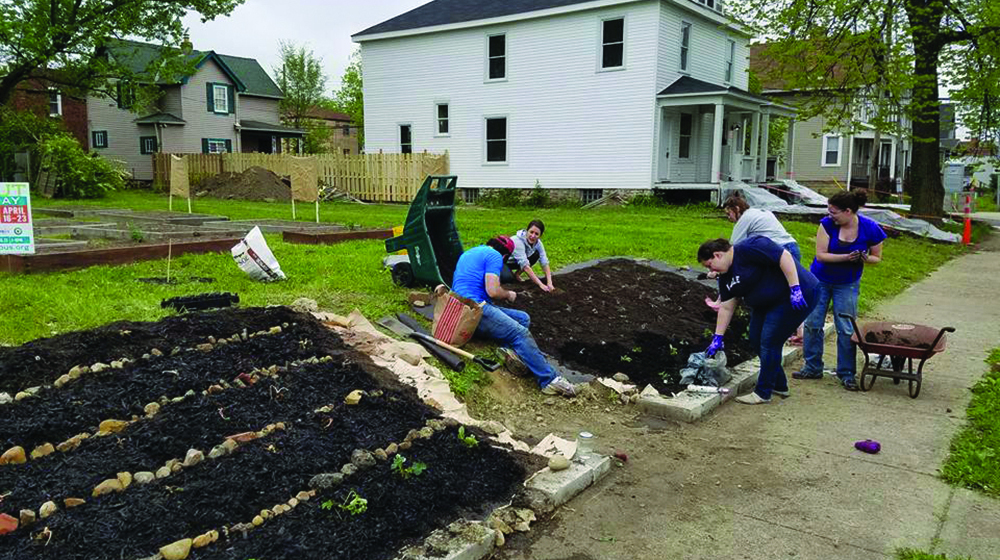 “You mean, we can talk about this in the church?!” Jenney Rice regularly hears this shocked reaction from young adults at Vineyard Columbus when they learn of the church’s commitment to creation care and environmental stewardship.

Rice observes, “Creation care is a way for us to draw young people into the church, and it gives them a different image of the church than they are expecting. Suddenly, they see that the church can speak with relevance to issues about which they and their peers care deeply.”

Rice is the pastor of community outreach at Vineyard Columbus — a multi-site church in Columbus, Ohio. A couple years ago, the church was introduced to the Evangelical Environmental Network (EEN), which triggered a series of conversations about what God might be calling the church to be and do in the area of creation care. Eventually, an interest group was formed with Rice as the leader.

Marqus Cole is the director of engagement and church outreach at EEN. Cole shares that EEN has three overlapping areas of emphasis: Scripture, science and society. “First, we want to get back to the basics of what our Christian vision of creation care is and program around that. What is the story in Scripture that God is telling us about his identity as Creator and our role as image bearers? Grounding people in Scripture is key. Second, it is critical to understand the science. Third, how can we as Christians relate to wider society as change makers and people of peace?”

Vineyard Columbus embodies this three-fold calling. According to Rice, one reason why a creation care initiative has taken root at Vineyard Columbus is due to consistent teaching on God as Creator and the dignity and value of everything God created. In addition, evangelical scientist Katherine Hayhoe’s book “Saving Us” has been instrumental for the interest group in exploring creation care as an important aspect of gospel witness.

Second, Vineyard Columbus has implemented practical steps to care for the environment that demonstrate an understanding of the science, including LED lighting upgrades at multiple sites, hand dryers in most bathrooms to reduce paper usage, bottle filling stations to reduce the use of plastic bottles, and motion sensors in certain buildings to reduce electricity. Other activities being considered are nature hikes for the congregation and potential collaboration with a climate researcher at The Ohio State University.

However, it is the third element — engagement with wider society — that clearly animates Rice in her passion for this work. Vineyard Columbus recently began leasing a plot of land for a new community garden five minutes from their largest campus and just two minutes from a food pantry operated by the church. But it is more than a garden; it is a genuine partnership with the community.

“We want to be a good neighbor, so we are intentionally inviting the community to join us in this effort.” As Rice describes it, this newest effort involves a holistic approach that seeks to care for the environment, address food insecurity and encourage Sabbath rest. As congregants cultivate the garden together with their neighbors, the food that is grown will source the nearby food pantry to serve the needs of the most vulnerable in their community. Keeping the Sabbath allows congregants to reduce their negative impact on the environment, as all creation rests.

Rice sees Jesus’ ministry as the model for engagement. Just as Jesus started with only a handful of disciples, so the church started with a small interest group, and is gradually expanding through ongoing conversations and invitations. EEN assists through training and coaching.

“This is the way missionary work should happen — equipping the community of believers and then blessing them to move freely into action as the Holy Spirit leads. Rooted in Christ, we seek to find common ground with others, as peacemakers,” she said.

If the humility and faith with which Rice tells the story is any indication, Vineyard Columbus is a living testament to David’s words in Psalm 24:1: “The earth is the Lord’s, and everything in it; the world, and all who live in it.

Cullen Rodgers-Gates is the director of development and membership at the National Association of Evangelicals. Prior to joining the NAE team, Rodgers-Gates spent 20 years in cross-cultural ministry, higher education and nonprofit leadership, including six years as executive director at Congo Initiative USA. He also served as assistant director of the Human Needs and Global Resources Program at Wheaton College, where he earned a bachelor’s degree in philosophy and a master’s degree in theology.