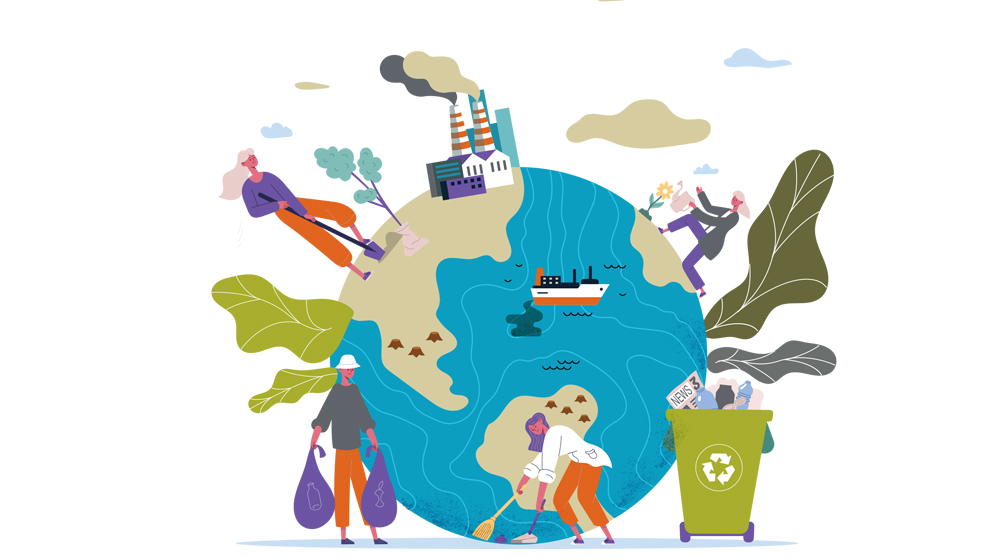 From the outset, God made us in his image to carry out an awesome assignment: to take responsibility for everything he lovingly made (Genesis 1:26; Genesis 2:15). Deputized as stewards of the work of God’s own hand, this means we must take good care of each other and the rest of creation (Psalm 24:1). As evangelicals, our commitment to Scripture means we must take this assignment seriously and carry it out to the fullest extent God intended.

Evangelicals are generally very strong in personal discipleship and individual responsibility, but we often stop there. Our approach to creation care is particularly emblematic of this. Individual actions like recycling and gardening come easily. But as individuals and in our churches, we shy away from environmental solutions at the policy level and in the public square.

Our hesitancy to take public action on climate and environmental issues runs counter to the biblical authority God has given us, counter to church history, and counter to what is required of us as evangelicals to defend life.

Walking in the Authority God Gave Us

Good stewardship of our personal resources is key to our assignment as caretakers of God’s creation. Creation care, first and foremost, is a discipleship issue. We honor God not only by the giving of our first fruits but by taking good care of the rest. In this way, our stewardship actions are both holy and sanctifying.

Our stewardship actions are also prophetic, pointing towards a creation fully restored and reconciled in Jesus (Colossians 1:20). As Nazarene pastor and bi-vocational waste manager Caleb Cray Haynes writes in his book “Garbage Theology,” recycling and composting declare that nothing in God’s creation is “waste.” As we use our consumer power to choose products, transportation and energy that are less polluting, we point towards the ultimate healing and restoration of both ourselves and creation (Romans 8:19–22; Revelation 21:1–5, 22:1–5). Each new tree planted is a glimpse of Eden restored and the tree life whose leaves bring healing to the nations (Revelation 22:1–5).

But when we limit our authority to home recycling and swapping out light bulbs, it begs the question: Is this all God had in mind when he put us in charge of everything he made? History shows us that public environmental action is not a radical new idea for the Church but actually part of our legacy.

As historian Mark Stoll details, the American conservation and environmental movements were birthed out of the Church. Their foundations are theological, sparked in large part by John Calvin’s teachings on creation. Calvin considered creation a “dazzling theater” of God’s glory and the “most perfect way of seeking God” second only to the Bible. He believed handing creation down to the next generation “as we received it, or even better cultivated” a core moral responsibility.

Calvin’s doctrine of stewardship fueled four centuries of Christian environmental care in the public square. Stoll traces the origin of conservation to the Puritans, who passed down ordinances to preserve forest resources, regulate timber cutting, and maintain healthy soil and farmlands as anti-poverty measures. As Proverbs 13:22 instructs us to leave a good inheritance to our “children’s children,” they made policies setting aside common land specifically reserved for future generations.

Creation Care as a Matter of Life

Today we face some of the greatest environmental threats in human history. The Church’s inaction on these problems not only risks our public witness but also threatens the health and lives of those Scripture specifically calls us to love and serve (Matthew 22:39, 25:45).

As a scientist, I find the human cost of climate change and pollution staggering. According to a 2021 Harvard University study, pollution kills nearly 9 million people each year worldwide — more than AIDS, tuberculosis, malaria, and acts of war and violence combined. In the United States, the American Lung Association reports that more than 40 percent of Americans live in areas with unhealthy, polluted air, causing up to 350,000 Americans to die prematurely
every year.

Today’s worst pollutants aren’t always visible in the air. Microscopic soot particles, spewed by traffic and emitted from traditional power plants, go into our bloodstream and get lodged in our brains, hearts and lungs. Medical research links prolonged exposure — even at low levels — to strokes, dementia, heart and lung disease, asthma and more.

The tragedy of air pollution and climate change is that our most vulnerable neighbors are the ones most severely impacted — this includes children, elderly, pregnant women, the poor, people of color, people with chronic illness or disabilities, outdoor workers, and many more.

Unborn babies and young children are among the most at risk. Air pollution contributes to 20 percent of newborn deaths worldwide, according to the 2020 Global State of the Air Report. Breathing unhealthy air has a similar effect as smoking during pregnancy and is linked to stillbirth, premature birth, and higher risk of developing life-long illnesses like asthma. Black and brown mothers and babies are exposed to pollution at higher rates.

This was all heavy on my mind while pregnant with my second son this past year. I did all I could to reduce my exposure to unhealthy air, but it was impossible for me to control the air outside my home. Clean air, pure water and a safe climate are public resources and thus require public protection. As evangelicals committed to defending life, we must rediscover and reclaim the mantle as leaders of public stewardship.

Scaling Up to Multiply Impact

Wise public action comes from the outflow of personal discipleship. Similarly, public climate and environmental stewardship is simply a matter of taking our personal actions and inspiring others to join us in action — whether that’s our family and friends, our churches, our businesses and our local community, or at our statehouses and in Congress.

For example, upgrading our home to be more energy efficient is wise environmental and financial stewardship of our personal resources. It reduces not only our carbon footprint but also our energy bill by hundreds each year. How much greater would the impact be if we invited our churches and neighbors to do the same?

Improving the energy efficiency of our church buildings means greenhouse gas reductions are measured in tons and energy savings in the thousands — cost savings that can be put towards church missions. According to the ENERGY STAR for Congregations program, if all of America’s 370,000 congregations increased their energy efficiency by 20 percent, it would save nearly $630 million for missions and other priorities. It would also prevent more than 2.6 million tons of greenhouse gas emissions — equivalent to erasing traffic emissions from 480,000 cars or planting 60,000 trees.

Finally, how large would our impact be if we advocated to our elected officials for smart legislation that lowers the cost barrier for churches to do energy efficiency upgrades and gain access to similar financial assistance that businesses have long enjoyed through tax credits? This is exactly what many of us and other multifaith partners did, creating a first-of-its-kind grant program at the U.S. Department of Energy for houses of worship and other nonprofits. This grant program is set to open for applications in early 2023.

Acting locally to help low-income households access energy efficiency funds from utility companies and other sources is not just for the climate — it means increased family stability as the threat of eviction from failure to afford bills is reduced; it means healthier children as home weatherization upgrades improve indoor air quality and remove toxic mold.

Climate and anti-pollution solutions are also acts of restorative justice. Creating green spaces and removing sources of pollution sited intentionally in Black and brown neighborhoods are key steps in addressing decades of historic and unjust community disinvestment due to redlining.

By reducing the severity of climate-fueled drought that causes crop loss and food insecurity, climate solutions are anti-hunger and anti-poverty solutions. They are central to preventing displacement, human trafficking, and refugee crises triggered by drought-exacerbated civil unrest and war, like we witnessed in Syria, or by extreme weather disasters, as witnessed in Honduras after it was hit by two monster category-4 hurricanes in the span of two weeks that left communities in utter devastation.

Although we may not always agree on specific policy proposals or prescriptions, taking our creation care practices into the public square is essential to walking in the full authority God has placed in our hands as stewards of his entire creation and faithfully shepherding the ministries, mission and people God entrusts to us.

Jessica Moerman is vice president of science and policy at the Evangelical Environmental Network, a climate and environmental scientist, and co-founding pastor of Grace Capital City Church in Washington, D.C. Prior to serving as vice president, Moerman was senior director of science and policy at the EEN. She worked as a fellow at the U.S. Department of Energy, The Smithsonian Institute and Museum of Natural History, and Johns Hopkins University. Moerman obtained her Ph.D. in earth and atmospheric Sciences from Georgia Institute of Technology and her bachelor’s degree in chemistry and geology from the University of Tennessee at Chattanooga.